Pretty much one year ago the musical journey of this project started. I had written the first outlines for a couple of songs and a very precise imagination of how the music of BORN IN AFAR should sound like someday. However, the idea of founding a solo project and the corresponding concept came into being much earlier:

Meanwhile, I’m doing music for about 10 years and contributed to different rock, metal and gothic bands as singer and guitarist. After the breakup of my last band almost two years ago, I set my mind on achieving something on my very own and going into a totally different direction. I wanted to be independent; to create something very personal and “different”.

Even in my childhood I was interested in Earth’s history, especially in the evolution of mammals and that of mankind – and I never lost this interest. Since I consistently deal with Darwin’s theory of evolution because of my proposed bachelor thesis, this should basal the whole concept finally. If you visualise that the cradle of humanity lies in the Afar region of Ethiopia – that’s why I chose the name BORN IN AFAR – and that Homo sapiens spread from Africa into the whole world, there is just no sense to declare people as “stranger” because of their skin colour, their cultural derivation or their faith. This and the nowadays sadly most forgotten connectedness to nature build the basic statement of all of my songs. Incidentally, I’d like to emphasise that I don’t want to take up a political position or to criticise something in a direct way, but rather try to alert from a neutral point of view to things that I assess as going wrong in our modern world.

Also the continent Africa with its flora and fauna and the several cultures fascinated me all along. When I then also became acquainted with the various traditional styles of music, it was clear that they absolutely needed to be a part of the concept. Thus, together with the cello for that I always had a foible, the musical circle was also closed.

Although BORN IN AFAR officially appears as solo project, there a several people who worked in the background during this year. Without these I probably wouldn’t have been able to get all this up. I would now like to say “thank you” to everyone:

Initially, there are my parents who always support me in everything and certainly not just praise all of it, but also offered criticism indeed. In this way and through the now or then necessary “earthing”, I am now there where I am. By the way, my mom Heike Klaas painted the wonderful cover of my EP “Eden”. Thank you so much! Then there is my brother who not only contributed an ingenious photo for the artwork, but also became an absolutely fan. I indeed have to say that he didn’t like my previous music and “just couldn’t listen to my vocals“. The last one in this group is my girlfriend Susannah. Without her I surely had surrendered many times or made decisions which I regretted later on. She is my calm anchor and ensures that everything is alright and I don’t sink into my mental chaos! I can always totally rely on her support, too.

Now the musical background: I admittedly write all of the songs inclusively every instrument completely on my very own, but I am just depend on the creativity of Jonas Langebrake when it comes to the percussion elements. Out of a simple idea or a boring beat, he forms the cool rhythms which shape the songs so much. He is not simply a musician for studio recordings or a session musician, but rather a hidden band member. The cello was recorded by Kamilla Eggeling during the studio sessions and will live be played by Constanza Besoain from January on, who can also be seen in the music video for “We Are All Africans”. In the recording studio itself, Gregor Ruhl was the expert behind the mixer and the recordings would surely not have become that good without him! A heartfelt thank-you to you four!

Furthermore, I especially would like to thank Lucas Johanningmeier for all the great photos and for shooting the music video with fully physical play, to Steffen Niers for the spontaneous cutting and editing of the video, to Jan Braun for creating the CD artwork, to Armin Höhn for the special effects during the studio recordings, to Anton for creating the website, to Mara for digitising the logo and to Natalie Gabriel for the Amharic spoken words in “Turkana”. Additionally, a huge thank you to Andy Jones who e.g. lends all his support for answering every question I have got and to Patrick Tango Fechner – you both know why!

Thank you all so much for accompanying this formation process and maintaining me and my perfectionism, and hopefully doing it further on!

I am very proud of the result!

Finally, I would like to thank all the people who supported me till now and followed BORN IN AFAR (I surely cannot name all of them) – but also everybody who will do it from now on, who buys the CDs and who visit the concerts! 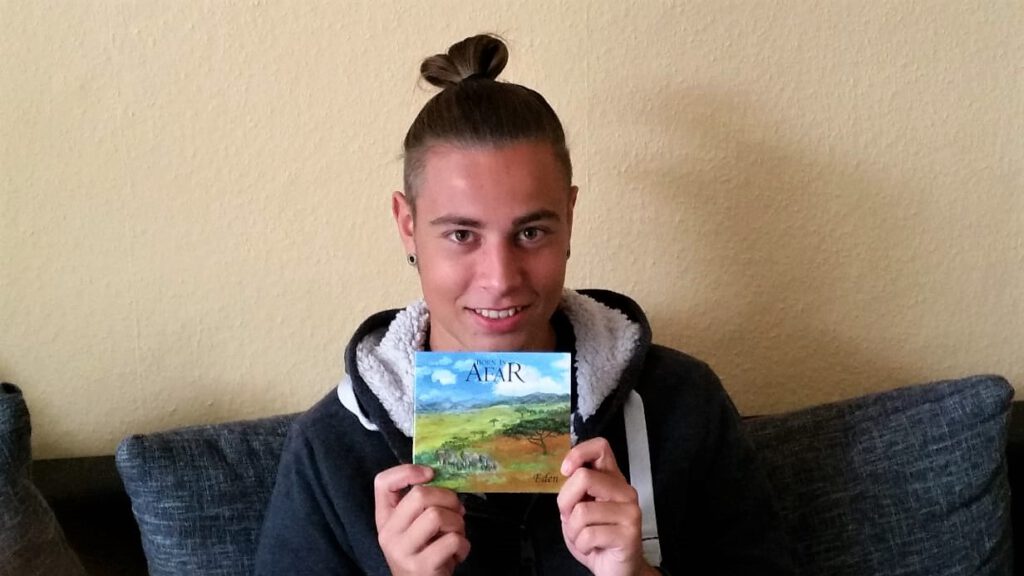